Tell Me Something Real

From my dear friend Beth at Big Blue Mess, a recommended post to read for Mental Health Awareness Month (and just because she's great). 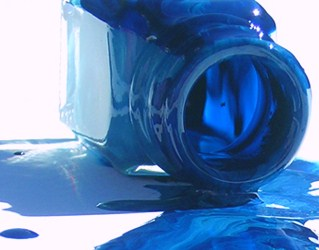 I wish there were a May Mental Health Awareness Challenge where we were encouraged (unafraid) to post something real – something unguarded – something that boldly proclaimed, “While I have had successes, I have also experienced epic failure/deep disappointment/profound sadness – I’ve had days where copious amounts of concealer and duck face at the perfect angle of a camera couldn’t fix – just like you.”

I like that challenge. I've been worried about my own mental health since childhood, as I saw how depression and anxiety affected my mother, how bipolar disorder and PTSD affected my father, and how I had bizarre nightmares and even felt suicidal briefly in my teens. Brain-chemistry imbalances run in my family. I've always tried to keep an eye on myself for that, but still I dismissed my chronic insomnia as no big deal, since it usually wasn't, back then.

Now, if I have a bad night of sleep that means three days of blinding migraines, so getting a good night's sleep is a lot more important. And it's harder than ever with my anxiety going through the roof. 3am panic attacks suck. The pandemic plus Junko's hearing loss (which sent her into a severe depression--severe enough to be terrifying for me, as in I was scared to leave her alone for fear she might do herself in) plus huge stress at work plus the loss of my dad (stepfather) and father all made things worse. The only good side of anxiety flareups is they seem to stave off my periods of relatively minor depression. "Minor" being a self-diagnosis, of course, and maybe a diminishment...I have periods when I am certain that everyone I love and the whole world would be better off without me, that my existence is pointless, that if I stepped out in front of that bus it would be a relief... But I remind myself that these periods pass after a few months, and people love me, and if I did die, they would be in pain. And that keeps me around.

Should I get help for this? I should. And I would if I could find it in a way that's accessible and affordable with someone I trust. So far I have not found this. Attempts to find a therapist in Fukuoka have been shockingly expensive and far away, and then the one I almost joined turned out to be a big believer in using Chinese medicine to balance my qi (Chinese medicine, which is commonly prescribed even by regular doctors in Japan, invariably gives me an upset stomach and diarrhea, and no benefits, and I'm very glad my current GP doesn't prescribe it) ...and the online attempts haven't worked out. So...so far I try to meditate. And I talk a mild sleeping med most nights, and try to get my migraines under control. And...I've pretty much stopped writing papers and making presentations, which are huge anxiety triggers for me. Not a great thing for a professor, I know, but my career is safe until retirement in 10 years, and if I never publish an academic book on utopian themes in literature, well, it's not like more than a dozen people would've read it anyway.